Mr. Le Huu Huy graduated from the University of Hochiminh City, Vietnam with a B.A. (Honors) in French Language in 1990.

He obtained his M.A. in Southeast Asian Studies from the National University of Singapore in 2002.

Mr. Le started his professional career as an interpreter of French with the Bank for Foreign Trade of Vietnam (Vietcombank) in 1990.

He later moved away from the routine work of a translator toward international banking transactions.

Thanks to his excellent job performance, he was given increasingly important responsibilities in the bank.

As Chief Representative in Singapore, Mr Le Huu Huy played a key role in promoting co-operation between Vietcombank with foreign financial institutions, resolving problems in international payments and making market information available to customers in Singapore and the region

In 1997, he was posted to Singapore as Chief Representative of Vietcombank to help promote co-operation with foreign financial institutions, resolve problems in international payments and make market information available to customers in Singapore and the region.

He worked closely with the Association of Banks in Singapore (ABS) to foster co-operation among banks and provide a better understanding of Vietnam banking system for Singapore-based correspondent banks.

Mr. Le also represented the Vietnam Banks Association (VNBA) in the permanent Committee on Co-operation in Finance, Investment and Trade (COFIT) under the auspices of the ASEAN Bankers Association (ABA).

Soon after his working stint at Vietcombank, Mr. Le remained in Singapore to pursue his postgraduate studies at the National University of Singapore (NUS) where he had been a part-time student for two semesters.

During his full-time studies he was exposed to different working environments in Singapore on a part-time / freelance basis and proved himself a fast learner and an outstanding performer.

At the same time, self-learning efforts earned him several professional qualifications accredited by Singapore-based financial institutions on financial planning, insurance and investment consultancy and a working position as Financial Services Adviser with Prudential Assurance Singapore in 2002.

By early 2003, he worked as Sales Manager with Ngo Chew Hong Group of Companies, a leading manufacturer of edible oils and fats in the Asia-Pacific region.

He covered Vietnam and CIS countries and travelled extensively to Vietnam, Russia and the Ukraine for business development and market expansion. 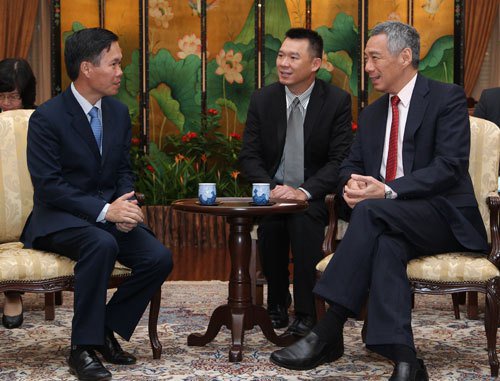 He is a freelance journalist who has contributed regularly to the Saigon Times, one of the most prestigious business magazines in Vietnam.

He is also part an editorial consultant with the Saigon Investment and Finance Bulletin under the Saigon Liberation Newspaper.

Mr Le Huu Huy (standing, right) with his guitar at a church event

“Singaporeand ASEAN in the Global Economy: the Case of Free Trade Agreements”

appeared in Asian Survey, a bimonthly review of contemporary Asian affairs published by the University of California Press in December 2003.

A native of Saigon, Mr. Le is proficient in Vietnamese, English and French and conversant in Mandarin, Malay and Thai.

He has been a Vietnamese language trainer-cum-translator at several private and public institutions in Singapore which include the Centre for Language  Studies at NUS, SEAMEO Regional Language Centre and ACS (International), etc.

Mr. Le Huu Huy is Director of Vietnam Global Network, a Singapore-based marketing consultancy and business training firm  which promotes and offers assistance in trade and investment, education and training in Singapore, Vietnam and ASEAN.

He is also running Vietnam Language Centre which provides translation and interpreting services and Vietnamese language courses for professionals and business people in Singapore.

One thought on “About the Founder”